I recently found that my local Trader Joe’s started carrying gluten-free fettuccine in the refrigerated section and this made me want some alfredo stat. That really rich and creamy kind, you know what I’m talking about. 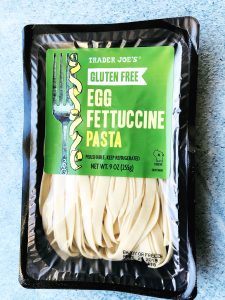 I briefly considered getting a jar of alfredo sauce, but let’s face it, the store bought alfredo sauces are just icky and taste bland. After a little more research, I realized that alfredo sauce itself is quite easy to make from scratch. I thought I’d put a little twist on it to experiment with some flavors not traditionally used–and the result was delicious! Of course there are many modifications you could make with this recipe, so know that it is quite adaptable.

One of the changes I made was to use sweet italian sausage instead of chicken for a little more flavor. I love the Trader Joe’s brand Sweet Italian Sausage links. They do produce a decent amount of fat, so that led me to cut the amount of butter I added. If you do use chicken or a less fatty meat like turkey, make sure you up the amount of butter you use. After you brown the sausage, you can remove it from the pan to make the sauce and later you’ll add it back in. That way you only need to use one pan and one pot. 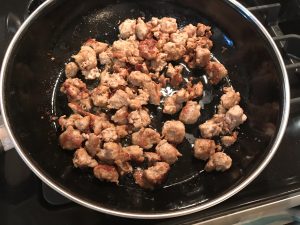 Another change I made was to use half as much heavy cream and use milk for the rest. This cuts down a little bit on the richness, but trust me this dish is still very rich and satisfying. I actually used this macadamia nut milk because it’s what I had on hand and I’ve been using it for a milk substitute. The brand is called Milkadamia (Get it?!?) and it’s DELICIOUS! Better than any other milk substitute I’ve tried like almond/coconut/rice/etc. I randomly found this carton at Homegoods, so I snatched it up, but usually I order it from Amazon. There’s actually a 15% off coupon right now!

Then, I decided to mix the cheeses up a bit, just for kicks. The cheese I thought would taste great mixed with parmesan is gouda. Have you ever tried it? Ever since I vacationed in Aruba, I’ve had a new found appreciation for it. I love to incorporate gouda wherever I can.

Finally, I added a combination of some italian spices–onion powder, oregano, parsley, and black pepper. The end result of all these changes was a savory, creamy, and cheesy alfredo!

Just over here wondering if we can restart January

Be honest, how many Amazon purchases have you made