I don’t know about you, but one of the things I don’t want to do in the morning is fill in my brows. It takes way too long, I’m usually half-asleep so they end up crooked, and I just don’t really want to mess with it. I’m excited to be sharing my experience of getting my eyebrows micro-bladed – something I’ve been wanting to do for several years, previously having some reservations about it. But first let me tell you a little bit about what microblading actually is.

What even is microblading?

Microblading is a semi-permanent method (so not exactly the same as a tattoo) in which a small tool scratches pigment on your skin in short strokes that look like hair. Basically, it’s a technique to fill your brows fairly permanently so you can say, “Yes, I woke up like this!”

Artists who do microblading have to study it for over a year and complete an apprenticeship – much like a tattoo artist – so it is quite an art form.

Head to my instagram if you want to see some videos of the process; I’ve saved my videos under the highlights section. First, I met with Jillian and she asked me how I wanted my brows to look. Then she measured my brows and penciled in what she thought that I would like. After agreeing on the look, she then put on numbing cream – an over-the-counter cream. I then waited 20 minutes for my brows to go numb. Meanwhile, I got a snack and chatted with Jillian. After 20 minutes, she started the first pass. I was a little bit nervous, but it didn’t hurt at all! It was a bit of an odd feeling, that felt like someone scratching a tool against my skin. After the first pass, Jillian started to do a second pass, but I was starting to feel the needles, meaning that more numbing cream was needed. Then I was good to go with the second pass. In total, the process took about 2.5 hours. But like I said, not painful at all – just kind of a weird feeling during the actual microblading. 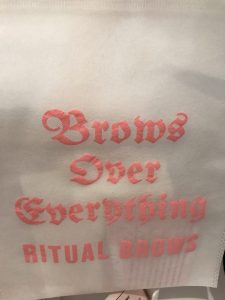 I was nervous that my brows would be bleeding or have giant scabs on them, but that wasn’t the case at all! They were reddish for the next 24 hours, but you couldn’t tell unless you looked closely. Jillian gave me a gentle wash for my brows and some lotion to keep them hydrated. She also gave me instructions on how to care for my brows and not accidentally use a product that would fade the ink. It is very important to stay out of the sun and to use lots of sunscreen after getting microblading, so this would not be a process to get done in the summer unless you can commit to being indoors. Bonus: her studio is stocked with dark chocolate rasberry squares…yum!

Why did I choose Ritual Brows by Jillian?

I met Jillian at a Chicago beauty fair and was instantly drawn to her cute pink booth because she was offering microblading with vegan and cruelty-free products. Since microblading does involve penetrating one’s skin with dye, and you know that I’m all about the safer beauty products, I wanted an option that I would feel comfortable with putting on my skin – particularly since it’s so close to my eyes!

She’s also just a really cool person that I instantly felt at ease with. She was kind and made me feel comfortable throughout the whole microblading process. Fun fact: she went to college for plant biology and then decided to work in a tattoo shop part time. Later, this became her full-time job and she became interested in microblading. Now she runs her business Ritual Brows, and she does everything for her business herself!

The second reason I was drawn to Jillian is that her work focuses on helping people to have natural-looking brows. I don’t know about you, but I’ve seen a few people who have gotten microblading and their eyebrows look like they have been permanently tattooed on with dark ink. Yikes! Take a look at her portfolio, and you’ll see that her work enhances peoples brows more than anything. Here’s an example of the work she did for another client: 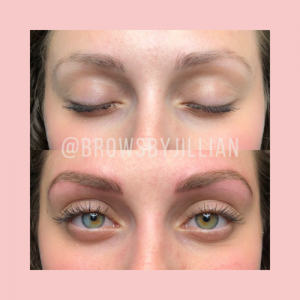 Since microblading is semi-permanent, it will eventually fade, unlike a tattoo. Microblading does not go as deep in your skin with the pigment, so it will need to be touched up from time to time. Jillian has her clients come in 6-12 weeks after the initial appointment for a touch-up, and then once per year after that. If you don’t go once a year, your microblading will eventually fade out. Also, if you wax or thread your brows, you will need to continue to do that. Microblading does not stop your hair from growing. I got a wax two weeks before getting my microblading done and will continue to keep it several weeks apart from any touch-ups.

This is one of the most common questions I’ve gotten since sharing my experience on my insta-stories. Microblading can cost anywhere from $300-$1500. In LA, microblading generally costs $1000-$1500! It’s really big there, and I’m guessing it will soon get bigger in Chicago, as well as the rest of the country. Jillian charges $350 for the initial session, $150 for the touchup, and then $200 for the once-a-year touch-up. If you bundle the first two sessions, you can save $50, paying only $450. Plus, use my code ‘BLISSFUL50’ to save $50! And yes, you can do the bundle PLUS my coupon for a total savings of $100! Book directly on her site.

So tell me, what do you think of microblading? Would you try it?

Just over here wondering if we can restart January

Be honest, how many Amazon purchases have you made